What is an Enabling Garden?

The Guelph Enabling Garden (GEG) is a multi-use garden designed everyone; for children, the elderly, and families of all types, but especially for those community members with varying degrees of physical and cognitive abilities. Our Garden is specifically designed to enable people to enjoy the full range of benefits that gardening can provide.

The key features of an Enabling Garden are:

The concept for the Guelph Enabling Garden began in 1999 when a number of organizations in the city that support those with physical and cognitive challenges, including the City of Guelph, identified the fact that there were no public garden facilities for this segment of Guelph’s population.

The idea for the Garden was first conceived in 1999 by co-founders Betty Richard, Abilities Coordinator, City of Guelph and D. Trevor Barton, Wet-Dry Marketing Officer, City of Guelph as a possible millennium project where a brain storming session was the impetus for the planning of a Guelph Millennium Garden. From that first meeting, where the seed of an idea was sown, the Garden gained momentum as more community minded people joined in such as:

The Master Plan for the then-called “Millennium Enabling Garden” was presented to the City of Guelph Community Services Committee, chaired by Councillor Gloria Kovach in April of 2001. The Report included the following background information:

“Two years ago the City undertook a public meeting to seek interest in the development of Millennium projects for the City of Guelph in the year 2000. From the meeting a number of projects were suggested including the time capsule sculpture, a bandshell in Royal City Park, and the Community Enabling Garden. A group of enthusiastic volunteers and staff came together to develop the concept for an enabling garden in Riverside Park. Over the past two years this committee has sought professional and volunteer assistance in developing an overall master plan for such a garden. The location of Riverside Park was chosen through discussion with City staff and community groups. This location was deemed appropriate due to its location adjacent to the river, adjacent to the accessible children’s play ground, and easy access by various modes of transportation (including Mobility Transit.)

The Committee has also consulted with the Grand River Conservation Authority and the City’s River System Advisory committee and both groups are supportive of the project. Overall city staff from Community Services Department and Works Department is supportive of the vision and project and look forward to assisting the committee in the implementation of the master plan.”

After six years from the inception of the Garden, planning, fundraising, landscaping design by Glynis Logue and construction, the Garden officially opened in 2005. Located within historic Riverside Park, Guelph has a unique garden designed for use by people of all ages with varying degrees of physical and cognitive ability. It incorporates many natural features and demonstrates respectful use of the environment.

This Garden is a showcase and destination point for more than 15,000 visitors, clients, workshop participants and volunteers each gardening season.

Membership allows your vote at our Annual General Meeting, you will receive Garden Program updates and it helps support Enabling Garden programs and workshops. A membership application form by contacting us directly. 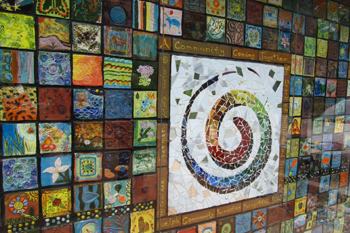 Get Involved with the Garden